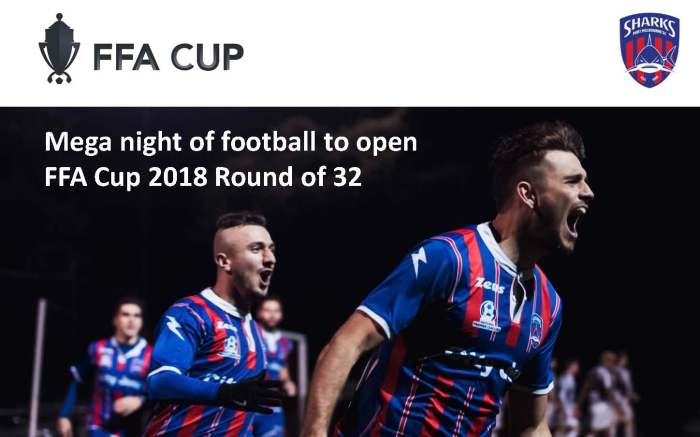 The FFA Cup 2018 Round of 32 will kick-off on Wednesday 25 July with six massive all-Member Federation Clubs match-ups featuring Avondale FC from Victoria hosting the Marconi Stallions FC from NSW as the first match broadcast Live and Exclusive on FOX SPORTS.

The second match night on Wednesday 1 August will see the first of the Member Federation club v Hyundai A-League club clashes with the Rockdale City Suns FC to host the last year’s FFA Cup Winners Sydney FC with the match to be broadcast Live and Exclusive on FOX SPORTS.

The other fixtures on the second match night of the FFA Cup 2018 Round of 32 include Heidelberg United FC hosting the Charlestown City Blues FC from Northern NSW at Olympic Village, Cairns FC and Armadale SC from Perth meeting at Barlow Park in Cairns and in an all-Hyundai A-League club affair, the Central Coast Mariners will travel to South Australia to face Adelaide United.

The third match night of the FFA Cup 2018 Round of 32 will be played on Tuesday 7 August with the headline fixture to feature the Bentleigh Greens SC up against the Wellington Phoenix at Kingston Heath, which will also be broadcast Live and Exclusive on FOX SPORTS.

In the remaining Member Federation club v Hyundai A-League club fixtures, the Newcastle Jets will head to Queensland to meet the Gold Coast Knights FC at Cbus Stadium and the Western Sydney Wanderers FC will travel to the Northern Territory to take on Hellenic AC at Darwin Stadium.

As well as broadcasting one match Live and Exclusive in full on each match night, FOX SPORTS will also LIVE stream and provide updates and crosses to all other matches in the FFA Cup 2018 Round of 32 (seewww.foxsports.com.au for all broadcast and streaming details).

Ticketing information for each of the FFA Cup 2018 Round of 32 matches will be released in due course by each home club. Please visit www.theffacup.com.au for further details.